Hurrah, A Review For Cecily Beasley

My book, 'Watch Your Tongue Cecily Beasley' has been reviewed by Kirkus Reviews!
This is the first review I've had, which is quite exciting, and luckily it's a good one.

It says some lovely stuff about the story, which is spot on, and says that my artwork has 'fruity tropical colour and theatrical linework', which is a great phrase.
But after working away largely alone on something, it is very nice to get some independant positive feedback.

This is the full review.

“That’s right, Cecily. If you make an ugly face, it just might get stuck.
There once was a time that little Cecily Beasley was a grade-A brat. She wouldn’t share; she slurped her food; her belches—public and smirk-enhanced—were stinky. She would stick out her tongue and waggle her fingers, and she took no heed when warned her gesture might freeze just so. Sure’s shootin’, one day her tongue won't retract, and a Mockingbeak Tongue-snatcher quickly makes a nest thereupon. A doctor counsels the family not to disturb the bird, which can be as feisty and ill-mannered a customer as Cecily. She had to wait—patience not being among her virtues, either—for the eggs to hatch.
Fredrickson’s salute to the risks of bad manners is gladdening and admonitory in all the right, playful ways. When the Tongue-snatcher hatchlings stick their collective tongues out at Cecily, it makes for a fair rebuke. Fredrickson also has her share of fun with the dexterity of her rhymes: “It’s a Mockingbeak Tongue-snatcher, rude and tenacious. / They roost on the tongues of the loud and audacious.”
Then there are Davis’ illustrations full of fruity, tropical color and theatrical line work; they are spot-on in catching Cecily in her predicament—the sheer misery of having a tongue as big as a mature sea cucumber.
This snazzy cautionary tale packs quite a bite (even with its tongue in the way). (Picture book. 4-7)”

It's available for subscribers to read now on the website here, and I believe it will appear for everyone to read two weeks before publication.
But I'll blog or tweet again when everyone can see it.
Here's an interior spread from it.


Here we are. I've found a bunch of talks by children's authors on the BBC iPlayer.
They are from Authors Live, organised by the Scottish Booktrust, and BBC Scotland.


It's part of Scottish Booktrust's 'Meet Our Authors' programme, where they have authors talking to a live audience of children whilst being filmed and broadcast simultaneously over the internet.
They've got an archive of the talks that you can watch from their website, all about 30-40 minutes long and they're a good bunch of writers, people like David Walliams, Julia Donaldson, Eoin Colfer, Francesca Simon, James Mayhew and Jacqueline Wilson.
So it's like being at a school when the authors do a visit.


Here's a link to the page on the Scottish Booktrust website
http://www.scottishbooktrust.com/learning/authors-live/on-demand


And they're also on the BBC iPlayer too here
http://www.bbc.co.uk/iplayer/tv/categories/learning/other

And I didn't want this post to be all writing, so here are some pictures too :)


These are character sketches for an idea for a book I've got, of Bentley Rhino, and Minty the Monkey. The story's also going to have Henley the Tiger and Spicy Jack the Parrot in it, so I'll see if I can put some sketches of them up in a post soon too. 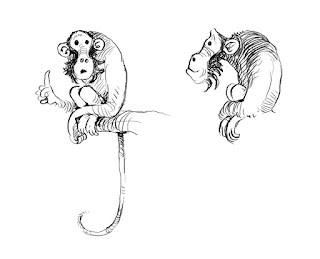 My Book Is Available To PreOrder!


I mentioned this in my last post, but I thought I'd cover it a bit more fully in this one.


'Watch Your Tongue Cecily Beasley' with illustrations by me is due out in September, and is now available to pre-order.


The story is about a girl, Cecily Beasley, who makes faces and sticks out her tongue at people all the time, but she learns her lesson when a Mockingbeak Tongue-Snatcher bird makes a nest in her outstretched tongue.
A very nice rhyming story written by Lane Fredrickson, which was great fun to illustrate.


It's being published by the lovely people at Sterling in New York, so everything was done via email.
I work digitally so roughs and artwork were emailed back and forth, and ftp'd and it worked really well.
Which I think is interesting. Not so many years ago, working for publishers in New York would've been really impractical, but now, pretty much all my work is done this way, even if working for someone nearby.


But here are a few spreads from the book, as a bit of a sneak peak.


Here are the links.