Quick sketch of a chap playing a trumpet.
I started with his trousers. 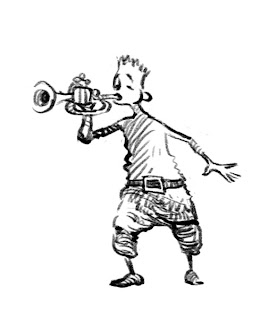 For some reason , when I draw a character, I seem to start with their legs/trousers.
It's not what I would have thought would be the normal foundation for creating a character, but they do often come to me trousers first.
Then if I get the neck and nose right, I feel I'm on the way.
Then I think of a hairdo.
But I do tend to leave arms till last.
Sometimes I only stick arms on when I sketch them doing things.
Maybe it's a bit like Alec Guinness only feeling he can properly do a character when he's got the right shoes.
Posted by Jon Davis at 07:59 5 comments:

I've been working on the design of a mailer type thing, and it's taken me ages, it's ridiculous.
I sort of did a sketchy first version, which wasn't quite right, so I re did it a bit, still all sketchy, and still wasn't happy, so I tinkered with bits, and faffed around, and faffed a bit more, and re-sketched some of it and felt dis-heartened.
Then I started again and re-sketched it all loosely, and re-jigged it and faffed and tinkered a bit more, but still wasn't happy with it, but wasn't sure why.
Then, I decided to work into it a bit more, to decide what each of the bits in it was going to be like.
And once I'd drawn it all properly, not sketchily, I realised there was too much in it, it was all a bit busy, and I also realised I didn't have a proper sort of concept or idea behind it, really.
So, I had a cup of tea, and thought about it a bit and suddenly had an idea for a concept and composition.
So now it's all drawn and I'm going to do the colouring.
But this initial bit has basically taken about a week, and I feel a bit like I was wasting time faffing around.
Maybe if I'd drawn it all properly earlier, I might've realised what was wrong with it earlier, which is a bit frustrating.
But I'm trying to persuade myself that the faffing was all an essential part of the creative process.
so, now I'm trying to do the colour nice and quick to make up for it, but I find colour really hard.
Best bet is to just launch in and whack it about a bit, I reckon.
No good being timid in this sort of situation.
I think I'll quickly and loosely put a bit of colour on, get it all covered, and then I'll have a cup of tea as a reward.
But anyway, here are some a sketches of a doggie that's going to be on it.

Dad's Army In The Cafe

There were two members of the Home Guard on the table next to us in the cafe yesterday.
Helmets, camouflage, boots, everything.
One with a Sten Gun, one with a Tommy Gun.
One having a Calypso, one having a Coke.
Yes, it was Historical Re-enactment time again. And this was at a different stately home.
There's some great stuff going on.
One of the other guys doing it was wearing these absolutely huge dungaree things.
I did a sketch of him, cos I thought he cut an interesting figure. 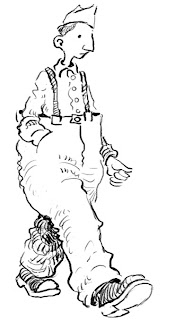 The Kate Greenaway Medal has just been announced. - http://www.carnegiegreenaway.org.uk/2010awards/
The winners are The Graveyard Book, by Neil Gaiman, and Harry and Hopper, by Freya Blackwood.
The Graveyard Book is illustrated by Chris Riddell, who is one of my favourite illustrators, so that's good stuff.
And Freya Blackwood's illustrations for harry & Hopper are brilliant too.
Lovely and lively and sketchy and some great perspective.
I know and like pretty much all the other finalist illustrators as well.
There were Oliver Jeffers, who I find really inspiring, Satishi Kitamura, who is really great, Dave McKean, who I know best from his comic stuff, David Roberts, and Grahame Baker-Smith, who I heard about at the LBF.
So it was a really tip of the top, tip top, cream of the crop list.
Posted by Jon Davis at 04:11 2 comments:

Three Musketeers in the Loo

I found three musketeers in the loo yesterday.
Not something you see every day, but not too weird under the circumstances, as there was a 17th Century re-enactment going on at a Stately Home type place we went to.
But it was odd having the musketeers in hats, spurs, swords and frills taking turns with the hand dryer.
You had to sort of step over their swords to get past.
Here are sketches of a couple of them. 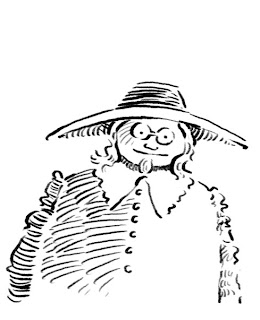 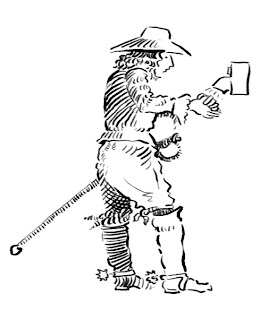 Later on, a man with little bails of firewood told us how to catch a duck.
That's a family day out right there.
Posted by Jon Davis at 03:49 5 comments: