Right, I've finally managed to update my website with some new work.
There's a bunch of stuff you might like to have a look at.
Here's a link to it
There are two pictures of Gorgonzola the Witch (Black & White, bottom half of front page) featuring Huddleston, ironing, and her friend Alison. So you can see how the sketches from the previous posts match up to the finished illustrations.
(Actually, my final drawings are often a refined version of a sketch, if I'm more or less happy with it, as I tend to just knock the opacity down and draw over it in photoshop, kind of like a lightbox - bit of info on my technique there - so you might spot a few similarities)
There's a picture from my book idea The Shirt Machine (also Black & White)
And the colour stuff features Elephants and Tigers, and a couple of Bears.
Here are some sketches working out little elephant - Small, and the big, old elephants, and the Tiger.
So you can do the same as with Gorgonzola, and spot the bits where I used them. 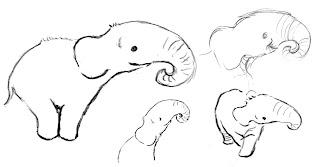 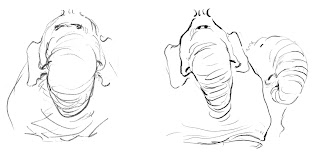 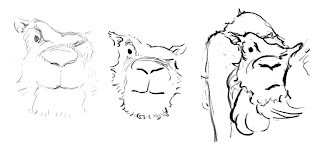 A bit more info on Gorgonzola the Witch.
I'm going to get a couple of pictures of her up on my website soon, hopefully start of next week.
But before that, here's a sketch of her faithful pet dragon Huddleston.
He was tamed via the power of peanut butter sandwiches. 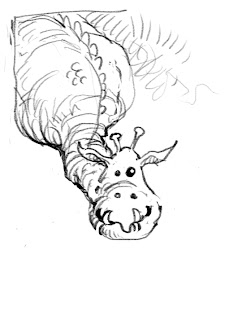 Sorry there hasn't been much drawing up here of late - I've been working hard.
But here we are, I've got something new to show.
I've been thinking about witches (a little bit late maybe, but still) and here is a character I thought up.
She is a witch called Gongonzola.
She's a bit disorganised, so tends to be in a bit of a rush, and so she's gone out with her bunny slippers still on.
And she didn't have time to put her skull patterned skirt on, so is going about with her bloomers showing.
And the cold weather has made her hair a bit frizzy.
Her witch best friend is more sensible and reliable, and is called Alison. 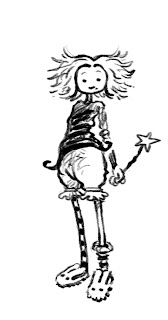 Here's a character sketch of her, and some rough idea sketches, to sort of show a bit of development of the picture. 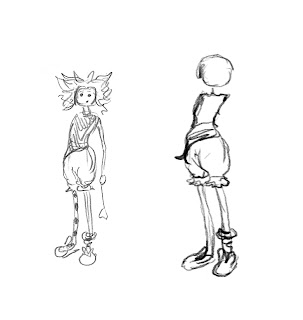 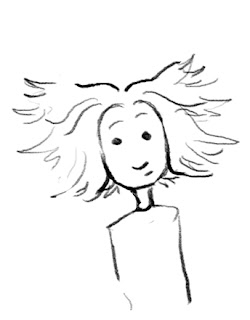 I will be putting a couple of pictures of her up on my website soon, which will also feature her friend Alison, and a Dragon, a cat, a frog and ironing,
A website update with a nice few pictures is on the way, actually, so will post more about that when it happens, too :)
Posted by Jon Davis at 05:00 2 comments:

Hi,
The long lists for the Carnegie and Greenaway award nominations came out last week.
You can see them here and here.
I just thought I'd do a post about it, cos there are a few people I know a bit vaguely through blog land and stuff, and there are a few books there that I'd heard of previously, so I just thought I'd do a quick chat pointing out a few highlights and points of note.
Purely from a very personal perspective of course, but then maybe that angle might be interesting.
So
Poly Bernatene has two books listed. He's an amazing illustrator, and his book When Night Didn't Come has some great stuff in it. Well worth a look.
Quentin Blake. I do like a bit of Quentin Blake, though he's probably pretty much the only illustrator most people have heard of, and is maybe a bit 'obvious' if you see what I mean. But I'm glad he's still doing stuff that's top quality, which is encouraging, really.
Emma Chichester Clark - a nice new version of Alice In Wonderland. Interesting stuff.
Ross Collins. Another fave of mine. I find his work really satisfying somehow, I'm glad he's on the list.
Emma Dodd does great simple illustrations. Her style is pretty different from mine but I do find it very inspiring
Emily Golden - I chatted to Emily at the London Book Fair, and I believe I'm right in saying that this is her first book, which is v cool. Well done indeed :)
Emily Gravett - I really like Emily's stuff. Apple Pear Orange Bear is stunning, and Mouse's Fears is brill, so I'm glad she's in.
Petr Horacek is a great illustrator too. Really nice textural simple stuff. I've got What Is Black And White, which is great.
Inkpen and Ingpen. It always amuses me how Mick Inkpen is an illustrator and is called Ink pen. Like a cobbler being called Dave Boot or something.
And I like the way they both have fairly obscure names, but that are so similar, and they do the same job, but differently.
But saying that, it's not just childish amusement at people's names, both are top rate, and I do really like their stuff too.
Oliver Jeffers rules. I try and read his books in the hope they will rub off and influence me.
Sarah McIntyre has a blog which I follow. She does comics as well, so is a bit of a link to the world of comics. Which is nice.
David Melling - another top illustrator.
Kristin Oftedal went to Kingston University, I saw her work in the final show and really liked it, and have seen her work popping up in a few places since. So it's nice she's got something nominated. I believe this may be her first book too.
Catherine Rayner's work is brill too. Two books in too. Top stuff.
Joel Stewart does pictures with fab loose line work. I really liked Dexter Bexley. Nice lot of detail in this.
So there you go. A few random thoughts on the award lists.
Hope there might be something there that you hadn't noticed, or that you might find interesting :)
Posted by Jon Davis at 05:25 No comments: