Shall I Make My Story Rhyme? 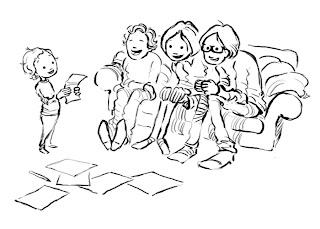 Hiya chaps,
Here's a sketch for a book I'm working on.
This one ended up not being used, it's all sort of moved on a bit, but I do have an affection for it.
So I thought I'd pop it up here.
BUT, In between doing this, I'm working on a story as well.
I've just got the start and the end, and I know what's going to happen, so it's 'just' a matter of filling it all in.
But what I was wondering was if anyone had any thoughts or experience with rhyming stories.
This one is at the very early stages of becoming formed but it's threatening to be rhyming.
They sort of keep popping out, and seem to fit the feel of it.
But I have heard that publishers prefer straight prose, cos it's easier to translate with co-editions, so I was wondering if I should wrestle it into straight prose instead, or just go with it.
Will it have a better chance of being picked up if it doesn't rhyme?
There are of course rhyming books that get published and do well, Julia Donaldson's stuff being an example, although maybe she is an exception, because she's very very very very good at it :)
Has anyone else out there done a rhyming story, or would you advise against it while there is still time to change?
Posted by Jon Davis at 04:30 No comments: